Looking for repetitive patterns, or fractals, in markets is something I enjoy. I know I need another hobby, but knowing what’s happened in the past and what is possible based on historical precedents can help one to make speculative decisions and anticipate future movements. Sometimes it works, sometimes it doesn’t…

I still think we are in for a VERY strong move in Gold mining stocks to the upside. I still believe a valid construct for analyzing what may come next is the 2001-2002 time frame. If so, we are on the threshold of that big move I am dreaming of as someone who is all in on both Gold and Gold stocks at this point (as well as a little silver and some silver miner exposure). Now hope don’t make it so and isn’t a very good investment strategy, to be sure. But the fundamentals are there and are as strong as they have been during this entire secular bull market based on the “real” price of Gold (i.e. Gold price divided by a basket of commodities).

Anyhoo, here’s an 11 year weekly log scale chart of the $HUI Gold mining index divided by the price of Gold ($HUI:$GOLD) to show where I think we are: 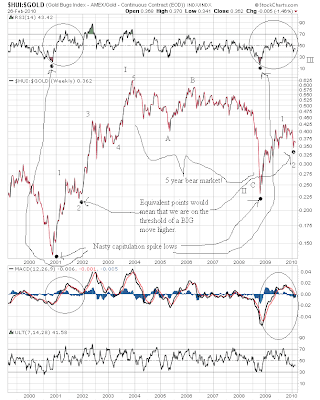 I know it’s a busy chart with too many marks on it and keep in mind that I am only a casual tinkerer when it comes to labeling price movements using Elliott Wave theory, but the implications are important if they are correct. Remember that the $HUI is an unhedged Gold stock index and it underperformed the price of Gold for FIVE YEARS before the capitulation lows in the $HUI:$GOLD ratio during the Great Fall Panic of 2008. After a 5 year bear market in the $HUI:$GOLD ratio, we are highly unlikely to see Gold stocks continue to underperform after only a one year bull market in this ratio. The real price of Gold tells us that the profitability of Gold miners is there on an operating margin basis. Though not all Gold miners will be in a position to cash in on this new margin expansion, others will and the sector as a whole should be set to benefit in a big way.

It is also important to remember that this stage of the Gold bull market, which has shifted from stealth to middle stage, will have even more power behind it. When big institutional money moves in (e.g., Soros, Paulson, Tudor Jones, Einhorn, Northwestern Mutual Life, China, India), this is bullish. It doesn’t mean the trade is too crowded, it means the bull market is about to become easier to ride. And who will all these big investors sell to? They will sell to the public and the Gold permabulls, but not until the price of their investments is much higher than it is now. Do you really believe that Soros and Paulson are doubling down on their bullish bets at the exact top?

Only when there is widespread public participation can a mania or bubble occur. Think internet or housing bubbles. Selling your Gold jewelry at 20 cents on the dollar to pay the rent ain’t a sign of a bubble, it is a sign that people are broke and desperate.

And don’t forget that the final stage of a bubble can last for a year or more and entails a dramatic vertical spike of greater than 50% that dwarfs previous phases/up moves of the preceding bull market before the bubble pops. In other words, the 20% gain last fall in the Gold price is not even close to constituting a bubble dynamic in our “modern,” unrestrained, fiat, debt-based monetary system. In the last secular Gold bull market, the final Gold price spike was 300% or so higher in ONE year (and silver was around 700%!!!). Now I understand that this cannot possibly happen again according to “experts” who told us Gold would never break out over $1000/oz. and now that it did the Gold price is about to collapse any second, but why would anyone care what these experts have to say?

I remain wildly bullish on all things precious and metal and think we are getting awfully close to a powerful breakout for both Gold and Gold stocks in U.S. Dollar terms. Of course, those who calculate prices in Euros are already enjoying historic secular new nominal highs in the price of Gold. New highs are coming for the Gold price in U.S. Dollar terms shortly in my opinion and I believe this will occur before the spring is over.

I believe Gold stocks will provide good leverage on the next multi-month move higher in the Gold price. I have already put my money where my electronic pen is, so I am as biased as can be. Once the Dow to Gold ratio gets to 2, I will be starting to sell my physical Gold. I plan on taking the proceeds from selling my physical Gold and buying Gold stocks (surprised?) for their final run, as Gold stocks should top out after the metal if the last two secular Gold bull markets are a good guide.

Gold stocks are historically significantly undervalued (see chart at the end of this post for proof) and a simple reversion to the mean should provide explosive profits in the Gold mining sector during 2010. I plan to be along for the ride.

Chart of the Week from Daily Wealth