Those who have put two and two together can never go back. Once you break through to the other side of the matrix, there’s no ignoring what’s happening before our eyes. The value of any currency units saved is being destroyed. Yes, it may take some time for this to be “officially” recognized and it may take time for the things we want to get more expensive, but the value destruction has already occurred.

The reality is that bubbles can collapse faster than currency value can, so that holding U.S. Dollars over the past few years has made one wealthier in real estate terms, as one can now buy a greater amount of real estate for the same number of debt tickets/currency units. Inflationism is everywhere in a fiat paper debt ticket system out of control, but it seeks out different asset classes during different parts of the longer term economic cycle.

When the traditional asset classes collapse, such as real estate and the stock markets, the rampant excess of previously created currency units flocks into different asset classes in a bid to preserve wealth and find safety. Some believe that safety is in the U.S. Dollar while others place their faith in Gold or other “hard”/tangible assets such as oil or copper.

But will Gold truly be a safe haven? What if the U.S. Dollar continues to “strengthen” and a strong deflation takes hold? The answer to that question lies in the government response to such a scenario. How do you think our government will respond to a rapidly strengthening U.S. Dollar? How did the U.S. government respond to such an event during the Great Fall Panic of 2008? How did all of the major economies of the world (i.e. Europe and America) respond to a deflationary collapse scenario in the 1930s?

If Gold goes to $1500/oz, what does this mean? We in America all think in terms of Dollars because that’s what we use to pay for bread, clothes and shelter. But does Gold truly get more valuable? If so, why? How can the value of a piece of metal change assuming a relatively stable supply?

Gold is a mirror of the paper currency measuring stick. When times get hard in any country, governments reach for the same playbook they have been using since long before Roman times. Defiling the value of currency units causes asset prices to rise. Rising asset prices favor bankers holding debt instruments against those assets and favor governments who tax those assets based on their nominal value. Which asset classes rise when currency is debased in part depends on the state of the economy. Gold is generally a lousy investment when times are “good,” plain and simple.

When a Kondratieff Winter (aka K-Wave Winter, secular credit contraction or economic depression) has begun, Gold is the go to asset. A secular credit contraction occurs once debt has overwhelmed the system. In this scenario, unlike the other parts of an economic cycle, no significant net aggregate benefit accrues to the economy by piling on further debt. An economic depression plays a role in cleansing an economic system of bad debt so that the slate can be wiped clean and the game can start all over again in the next generation/next cycle.

As sick as it sounds, this is a repetitive cycle of economic herd behavior. Bust follows boom like night follows day. Because the biggest cycles last at least a generation, it seems as though every other generation has to learn their economic lessons all over again. A stock and real estate mania led up to the 1930s secular credit contraction just like it did over the past decade in America and just as it preceded the Japanese bust that began in 1990 (continuing to this day in the case of Japan if you didn’t know). Such cycles happen with or without a Gold money standard, although debt-backed paper money ensures the manic-depressive swings are wilder and more destructive. This is why the swings in the Dow to Gold ratio became more erratic once we gave control over our nation’s money to a private corporation that is not a part of the government and has no reserves – I guess this is why we call them the federal reserve.

But the stability of the measuring stick also changes how far one can fall behind if one holds the wrong asset class. In other words, a debt-backed, out of control paper system means you better get it right in the investment casino or your savings will collapse in purchasing power awful fast. Look at the plot of the Gold price below, which covers the time period from 1973 thru the end of February, 2010 (chart copied from Goldprice.org): 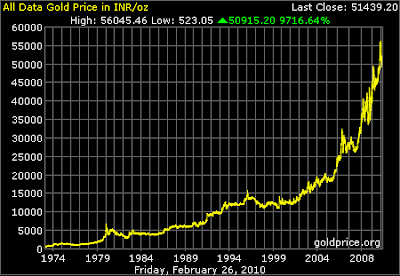 Since the 1979-1980 Gold price “spike” American Gold investors talk about, which doesn’t look like much when Gold is priced in Indian Rupees, Gold has gone up roughly ten fold in Rupee terms thru February 2010. That would put us at $8500/oz in Dollar terms if our Gold price chart were the same! And yet, we all know that the value of Gold is not significantly different between the two countries at the same point in time. The measuring stick is different. The currencies are of different value relative to one another and relative to Gold. 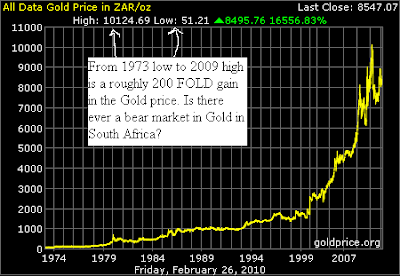 The value of our American currency measuring stick will be changing in different ways over the short and intermediate-term. But in the longer run, the value of our currency is going to be significantly lower. A squalid debtor who has lost the faith of the global economy (i.e. the United States) does not emerge on the other side of the debacle with a strengthening currency – at least if history has any value at all in predicting future outcomes.

For example, certain U.S. Dollar-based deflationists point to the strengthening U.S. Dollar that occurred during the 1930s and state that the Dollar will rise again during the current deflationary period. But we were a net creditor in the 1930s and are a squalid debtor during the current cycle. If we want to compare apples to apples, let’s compare the America of today with the British economy of the 1930s. Want to guess how Gold fared using London Market prices once Britain, the heavily indebted senior economy of the world at the time, bailed on its Gold standard?

The following is copied from the Measuring Worth site and I did not attempt to verify the accuracy of these numbers, so caveat emptor (if anyone has access to chart(s) of the market price of Gold denominated in European currencies during the 1930s, please let me know!):

Couple this with a chart of the British Pound (stolen from Martin Armstrong) from the 1930s and you see the illusion clearly: 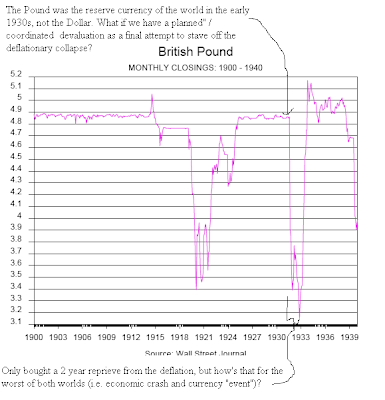 The British Pound collapsed in value when Britain left the Gold standard but then rebounded to new highs a few years later! This is deflation in action. However, despite the currency “index” moving higher, the Gold price continued to rise and outperformed the Pound by a massive margin when looking at the full depression “cycle.” So, yes, the U.S. Dollar Index may fibrillate to and fro relative to other debt-backed paper tickets, but Gold will continue to rise and outperform the U.S. Dollar (short term swings aside) over the next few years.

And when that measuring stick known as our currency becomes noticeably “shorter,” the economy will be so weak that stocks may or may not be able to reach significant nominal new highs, as with real estate. But Gold will protect people’s savings during this portion of the cycle as people look to preserve what little they’ve got left and the speculative animal spirits continue to drain out of traditional asset class markets into the last bull market left standing: money itself.

Those who think Gold is no longer money think a 40 year reckless experiment can supplant common sense and thousands of years of collective wisdom. For even if we switch from a U.S. Dollar debt-based international monetary system to a new debt-based monetary system, Gold will continue to be the immutable measuring stick by which currencies are measured.

This is why paper debt peddlers (i.e. central bankstaz and governments) hate Gold so much and will continue to fight its rise with misinformation, slander and market manipulation. But they will fail to stop Gold’s rise, as they have throughout history. This is because Gold is more reliable than the paper promises of apparatchiks and will continue to be a measure of people’s confidence in those paper promises long after the current cast of characters is gone. Those in charge know this (i.e. central bankstaz and their respective governments), which is why they own much of the world’s Gold and list it on their balance sheets as money!

Holding real money means much more than nominal gains. In other words, it is not just about being able to buy more paper debt tickets with your Gold, it is about the increased purchasing power Gold will continue to have relative to stocks, bonds and real estate over the next few years. Paper debt tickets may buy more real estate and stocks in a few years than they can now, but there are no guarantees (the inflation-deflation debate ain’t over!). However, it will take a greater number of paper debt tickets to buy the same amount of Gold in a few years and thus one’s “true” savings will increase to a much greater extent by holding physical Gold rather than U.S. Dollar cash if deflation is where we are headed. The secular bull market in Gold is not over and won’t be close to over until the Dow to Gold ratio reaches 2, and we may well go below 1 this cycle.