The value of common stocks relative to Gold is about to accelerate in the opposite direction the Larry Kudlow and Jimmy Jack Cramer crowd are expecting. The concept of relative wealth is an important one for Gold bulls to comprehend and embrace, as it allows them to calculate gains in something besides unstable paper debt-backed fiat currency, which is a worthless measure of value. In other words, it negates the need to worry about the inflation-deflation debate.

The best example of this mental calculation of value is the Dow to Gold ratio. The average American, if they still have a job and any savings left, puts their excess money in stocks, real estate and/or government bonds. This is the absolute wrong thing to do, but the average American paperbug has been indoctrinated beyond what seems possible. Like members of the Jim Jones cult, most Americans are paperbugs and all-too-ready to drink the apparatchik Flavor Aid being served in public schools, on the nightly news and by mainstream financial publications that employ ignorant commentators like Ben Stein who preach “stocks for the long haul and everything will always be OK or better than OK”.

The bottom line is a simple but powerful concept: Gold will continue to increase in value relative to general stocks, real estate and government bonds, as it has over the past decade. This isn’t rocket science, it is simply the swinging pendulum of financial history. Trust me when I tell you that you don’t want to “buy and hold” Gold forever as an investor with a finite lifespan (unless you’re going to die in the next 10 years…).

Since a good picture is worth more than 1000 words to me, here are some charts expressing the Gold versus stocks comparison. First up, as a continuation of one of my previous posts regarding the all-important head and shoulders pattern in the Dow to Gold ratio, here is the breakdown using a weekly linear chart of the last 3.5 years that only shows weekly closing prices to negate the noise created by so-called “fat finger trade” days on Wall Street: 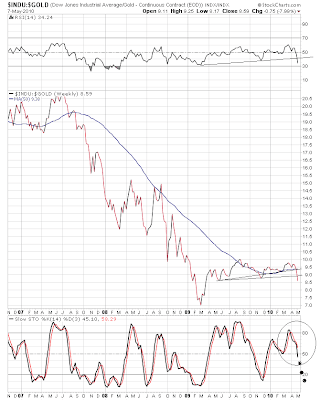 And here’s a more “foresty” secular view of the Dow to Gold ratio since 1980: 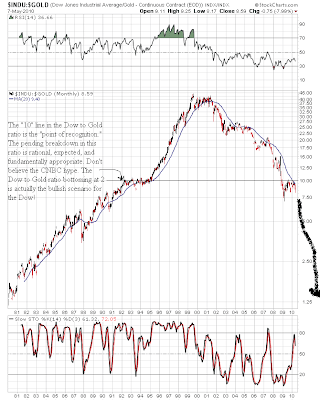 I would also like to show the ratio of Gold to stocks in a different way, since we’ve all been conditioned since we were old enough to care to look at markets bullishly. Here is the Gold to Dow ratio 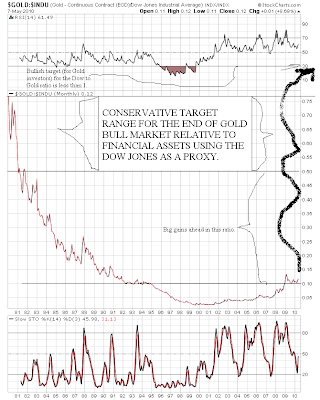 Just another “trees, meet the forest” perspective on where we are and where we’re headed to keep both you and I from focusing too much on short-term noise. WAKE UP, PAPERBUGS! IT’S NOT TOO LATE! Oh, forget it. I don’t know why I bother…